Our Success is Derived From Our People · Quality · Technology 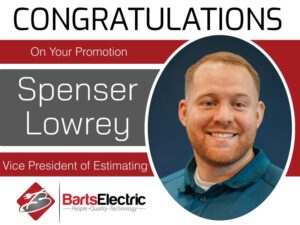 Kansas City, MO – Bart’s Electric is very pleased to announce the promotion of Spenser Lowrey to Vice President of Estimating.

Lowrey began his career at Bart’s Electric in 2013 as an electrical apprentice and worked his way up through the ranks, traveling around the country for a number of different projects. “Traveling gave me the chance to work on unique projects,” said Lowrey, “and to see something other than standard commercial jobs.”

As a field apprentice working at Nellis Air Force Base near Las Vegas, Lowrey began learning low voltage and fiber optics. He was challenged to oversee areas of the communications team and eventually lead the entire communications side of the project. After successfully completing both the four-year Apprenticeship program and Journeyman programs that are offered in-house by Bart’s Electric, Lowrey became a certified instructor with Associated Builders and Contractors. On passing his knowledge on, Lowrey said “I now teach every year and love it. There is nothing better than watching others around you learn and succeed.”

“Spenser epitomizes servant leadership,” said Brett Walker, President. “He has a great attitude and continues to go above and beyond at everything he does.” Lowrey joined the estimating team in 2016, and over the years has worked on design build estimates, budgetary proposals, large military projects, and much more. He’s now eagerly looking forward to this new opportunity as Vice President.

Lowery commented, “I am grateful for the opportunities I have had and will continue to have. Part of the culture of Bart’s Electric is that we build people. I feel like my journey is a great example of how people are built. I am grateful for the leaders and mentors who have helped build me. I would not be the person I am today without them.

We believe that to build yourself you must build others, and I plan to carry on this practice by building the next generation of leaders. It’s such a simple statement that we live by that directly affects our lives and those we are around. At Barts Electric, We Build People.”

Walker is also excited to see where Lowery will go in his career. “His dedication, hard work, excitement and pursuit of excellence proved to us that he was the very best candidate to lead our preconstruction and estimating team,” said Walker. “Under Spenser’s leadership we have secured more work than ever, developed new customer relationships, expanded our level of expertise in critical fields, and most important, helped build our people through education, training and stewardship. We look forward to many years of growth and success with Spenser leading the way.”